skip to main | skip to sidebar

After a four-month layoff, we finally were able to reconvene and continue the campaign this past weekend. As we had six of us present, we got in three battles. This taxed my amount of 20mm troops, as it turned out, and actually ran me out of buildings. Looks like I need to acquire some more stuff! Here were the three battles:

The following three entries give battle reports for each of the engagements. The end results were Zeke's marker moved 2 spaces forward towards the capital, Allen's advanced one, and Joel's fell back one. Here is a summary of how far each faction has advanced:

Hopefully I will post some pictures in the next day or so...
Posted by Mike Demana at 8:22 PM No comments:

Relations between the numerous Baluba tribe, the majority in parts of northwest Kammebalango, and the Matangan Unification Front, have grown steadily worse since independence. Many Balubas are pro-government, while the Matangans are steadfastly anti-government. The disagreement broke into open fighting when a Matangan force attacked a Baluba ranch not far from the village of Basankusu. Local officials speculate that the Matangans were raiding the Balubas to steal cattle to feed their growing forces. 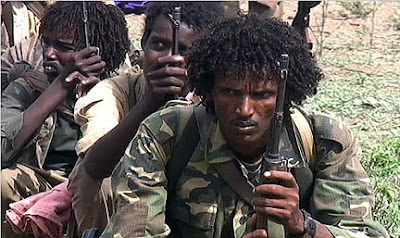 "The Matangans did not get away with a single head of our precious cattle," Michele Defamzu proclaimed the day after the battle. "Let the mushroom eaters fill their bellies with their foul fungus -- they still die by the bullet!" Defamzu alluded to the rumor that fighters loyal to the front were known to ingest hallucinogenic mushrooms prior to battle in the belief it will protect them from enemy guns. Defamzu admitted that many Baluba militiamen were slain in the attack, and vowed revenge.

A spokesmen for the Matangans said that their forces drove the Baluba militia from the ranch in disarray. We seized their ranch offices and all their money and equipment. "We did not want their diseased, scrawny cattle. The Balubas can hunker down and hide behind their herds if they wish, but it will not protect them from us!" 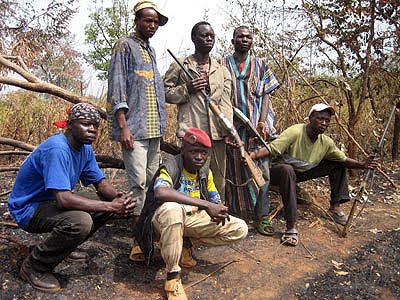 Ranch workers said that a Matangan squad in a truck sped quickly to the ranch offices and overran them before guards could prevent it. They said that the stout walls of the two storey building made it into too powerful of a strongpoint, and the Baluba militia had to fall back. The workers confirmed that the guards held firm to a patch of jungle that overlooked the cattle pen, preventing the Matangans from making off with the herd.

Relations have steadily worsened between the two tribes following the attack, and all out warfare for control of northwest Kammebalango is likely to happen soon.
Posted by Mike Demana at 8:01 PM No comments: 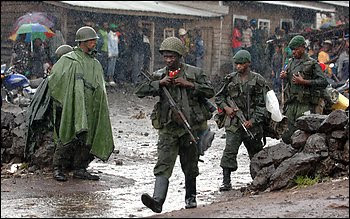 Rebel fighters loyal to the People Fighting Fiercely Faction Transcendent (PFFFT) outlasted government troops in a firefight on the outskirts of the village of Kipushi. The rebel forces moved quickly into town, seizing several key buildings and fortifying them. Although they were shelled repeatedly by heavily-armed government soldiers, the rebels clung fiercely to their gains, forcing the army to withdraw. 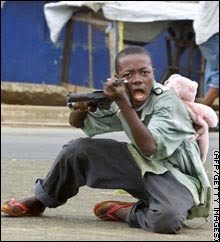 "We killed dozens of the bastards, but they did not seem to care if they lived or died," complained Col. Tomas Graveau. "How can you defeat people who don't know whey they've been beaten?" Graveau vowed to defend the main part of the village, and drive off any further attacks by PFFFT.

A spokesmen for the rebels said that his faction has much support in the area, and will soon seize Kipushi proper. "Our fighters are willing to lay down their lives for their freedom. Only when this corrupt and puppet regime of the West has fallen will the people of Kammebalango truly be free. Until that day comes, PFFFT will fight fiercely for all our country's people."

The spokesmen acknowledged that his troops suffered heavy losses from government mortar and cannon fire. However, he claimed the prestige of defeating the government in battle has led to a vast increase the number of recruits arriving at their camps.
Posted by Mike Demana at 7:47 PM No comments:

JuJu Tribe Driven Back from Isiro 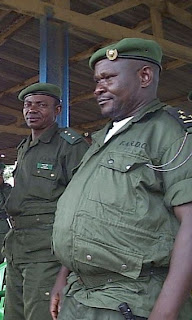 Tribal militia from the JuJus, who predominate in much of northwest Kammebalango, were driven back from the village of Isiro by government paratroopers. Col. Stefan Verdofamwe explained that a lucrative shipment of United Nations had been dropped off in the village with inadequate protection. "Fortunately, my paratroopers were nearby, and when we heard the JuJus were advancing upon Isiro to seize it, we intercepted them," Verdofamwe said. The colonel explained that his paratrooper regiment will maintain security over the shipment of food and medicine "to ensure its safety."

A spokesman for the JuJu tribe said that the shipment was intended for the people of Kammebalango -- most of whom in the area are from his tribe. The chief had ordered his militia to collect it and distribute it to needy villages in the bush. "Now that the army has it," the spokesman said, "none of the poor people will see a morsel of the food or a drop of the medicine." He vowed that the tribal forces will reorganize quickly and continue to strike back against government corruption. 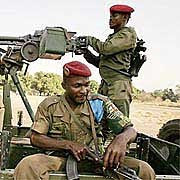 Observers say that the fight was largely one-sided, as the paratroopers were much better armed and trained. The militia had no answer for the two armored vehicles and their heavy machine guns. The lightly armed militia fighters were cut down in droves by the government troops. Isiro policemen, who had been charged with guarding the shipment, took cover during the firefight, but were unscathed. Neither side fired upon the policemen, who let the two warring factions fight it out. Heavily outgunned, they surrendered the shipment to the paratroopers after the firefight was over.
Posted by Mike Demana at 7:34 PM No comments:

"Chaos in Kammebalango" is a wargaming campaign set in 1960s Africa. Players control rebel factions each trying to take control of the country. The campaign rules are called Path to Power and were written by the game master. Battles are also fought using the GM's simple modern skirmish rules, "Uh-oh, Congo!"

Mike Demana
"Chaos in Kammebalango" is a modern Africa wargaming campaign created using my PATH TO POWER rules. For more info on my other gaming activities, check out my website at: http://home.earthlink.net/~mikedemanagames/index.html